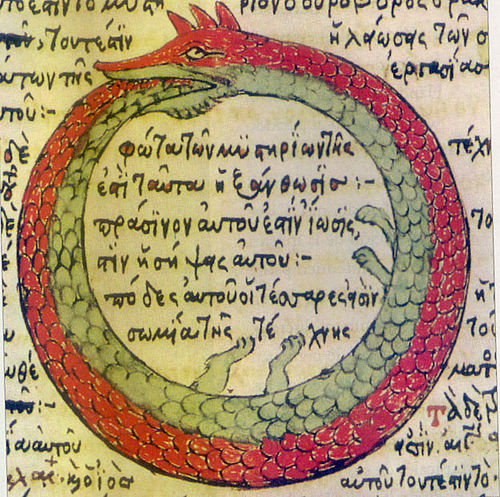 The ouroboros or uroboros (/ˌjʊərəˈbɒrəs, ˌjʊəroʊ-/, from the Greek οὐροβόρος ὄφις tail-devouring snake) is an ancient symbol depicting a serpent or dragon eating its own tail.

The ouroboros often symbolizes self-reflexivity, introspection, or cyclicality, especially in the sense of something constantly re-creating itself, the eternal return, and other things such as the phoenix which operate in cycles that begin anew as soon as they end. It can also represent the idea of primordial unity related to something existing in or persisting from the beginning with such force or qualities it cannot be extinguished. While first emerging in Ancient Egypt and India, the ouroboros has been important in religious and mythological symbolism, but has also been frequently used in alchemical illustrations, where it symbolizes the circular nature of the alchemist's opus. It is also often associated with Gnosticism, Hermeticism and Hinduism.

Learn more about ouroboros from Wikipedia.